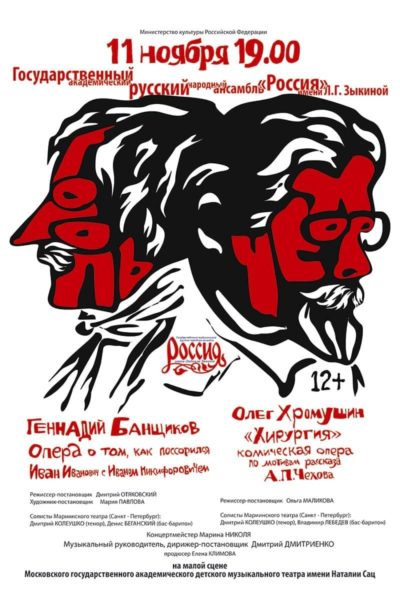 The Lyudmila Zykina’s “Russia” ensemble will present the world premiere of “Opera comics” on the small stage of the Natalia Sats Moscow children's musical theatre. Opera comics is a version for the Russian folk orchestra of Oleg Khromushin's comic opera «Surgery» and «Opera about how Ivan Ivanovich and Ivan Nikiforovich quarreled» by Gennady Banshchikov. These operas were based on the works by Chekhov and Gogol.

Creating such a performance is a serious experiment. The artistic director of the «Russia»ensemble Dmitry Dmitrienko, together with his soloists Sergey Kornyakov and Vladislav Afanasyev, conducted a deep and serious work on the arrangement of musical material for the orchestra of Russian folk instruments of operas by two modern Russian composers. The result of the experiment was the emergence of a virtually new musical genre — opera comics. The Director's interpretation of the musical material by Olga Malikova and Dmitry Otyakovsky filled the production with vivid imagery and volume.

The Opera roles in the performance will be performed by Mariinsky theatre’s soloists Denis Begansky, Dmitry Koleushko and Vladimir Lebedev. Literary material based on the works of the geniuses of Russian literature Chekhov and Gogol, combining sharp humour, lyrics and drama, allowed the performers to create multi-faceted stage images.